pride.codes provides a collection of simple widgets for businesses to add to their sites. We want businesses to actively show their support for their LGBTQI+ colleagues.

We want businesses to 'fly the flag'.

Design based on theme by Kishan B. 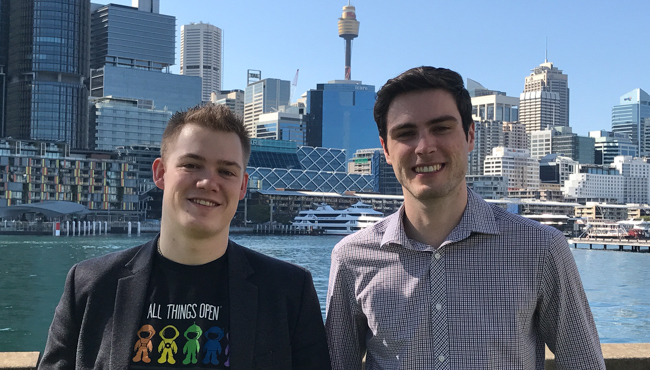 SYDNEY, Australia - September 18, 2017 — Sydney based technologists Patrick Murray and Jack Skinner have come up with a delightfully simple set of rainbow flags that website owners can add to their online presence. The two started the project as a way for technology businesses to actively call out their support for LGBTQI+ staff and hope that the project will grow into other industries as well.

The website https://pride.codes offers a simple collection of open source code snippets designed to make it easy for any website admin to fly a rainbow, regardless of technical skills, to fly a rainbow. Just choose a flag and follow the instructions and let pride.codes do the rest.

“We believe that all organisations large and small can and should show their support for LGBTQI+ staff regardless of their political stance on Australia’s Marriage Equality postal survey,” said Jack, co-founder of the project. “This isn’t about telling staff how to vote. While companies can fly a ‘Vote Yes’ flag if they desire, it’s about standing side by side with colleagues, regardless of who they love.”

We know first hand that the marriage survey has had a profoundly emotional impact for the LGBTQI+ community. 2011 census data reported over 33,000 same-sex couples in Australia, with this figure expected to have grown. The 2014 “Face the facts” campaign by the Australian Human Rights Commission showed 11% of Australians were of a diverse sexual orientation, sex or gender identity.

Having employers and community leaders visibly show support for their teams and staff is a beautifully simple and effective way to raise awareness and morale in the workplace.

Patrick further explained “Flying a flag doesn’t require a financial investment, but it’s a hugely positive way to show support for staff who are affected by the vote. We’re working to reduce the technical barriers for businesses to fly the flag so that they can stand side by side with their team.”

Last week marked the commencement of the Australian Marriage Survey and it was met with a wave of technology businesses, startups, and incubators raising the rainbow flag on their social media.

Disruptor’s Handbook is one such brand that went rainbow last week. Co-director Joanne Jacobs commented “we chose to go rainbow because we believe that the future of business is dependent on diversity and inclusiveness. We felt the need to support people who have suffered enormously from exclusion, prejudice and disenfranchisement over generations. No one should have the right to exclude others on the basis of the way they love.”

Hundreds more businesses and organisations have signed an open letter of support for marriage equality as published on the Australian Marriage Equality website.

To fly the rainbow flag no your site, visit https://pride.codes or find the team on Twitter @pridecodes.

Pride Codes provides a collection of simple rainbow widgets for businesses to add to their sites, allowing businesses to actively show their support for their LGBTQI+ colleagues. We want businesses to ‘fly the flag’.